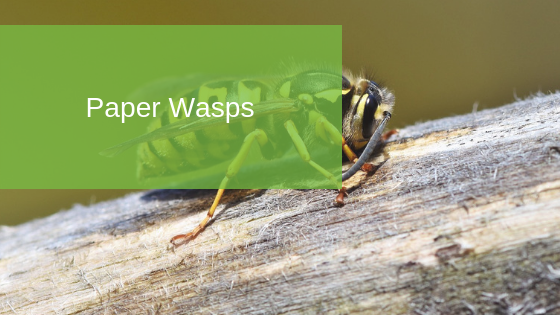 There are over 100,000 wasp species worldwide and about 10,000 in Australia. Luckily, there are only a handful of species that cause the majority of problems with homeowners. Most of these fall under the category of paper wasps. Problems with paper wasps usually occur when they build a nest near a home, which brings lots of wasps into close contact with humans. Although they aren’t typically very aggressive, paper wasps will sting if disturbed.

Paper wasps have a narrow waist, small head, medium antennae, and two pairs of brownish wings. Native paper wasps are more muted in color than European wasps or other more aggressive species. They are normally a combination of brown, black, yellow, or orange in color. They are also on the small end of wasp species, ranging from 15-20 mm long. Paper wasps can be found throughout Australia.

Paper wasps get their name from the appearance of their nests. These wasps mix saliva with wood pulp or wood fragments to form a series of cells that eventually become an inverted cone-shaped nest. When the mixture dries, it closely resembles paper. Nests are often found hanging from trees or under the eaves of homes.

Paper wasps build small nests that gradually grow larger throughout the summer as the population grows. They are beneficial pollinators, as they regularly visit flowers and plants to feed on nectar. The wasps will lay their eggs inside the hexagonal shaped cells of their nests. The larvae develop inside these cells, eating caterpillars that the adult wasps place there.

As mentioned, paper wasps are not generally very aggressive unless they are defending their nest. If they feel threatened, paper wasps can sting multiple times. Some individuals are allergic to the venom and may suffer a reaction. Common symptoms of wasp stings include pain at the site, redness, and in severe cases, anaphylaxis. People with known allergies to wasps and bee stings should carry a preventive medicine and seek medical help immediately if stung.

Due to the pain and potentially serious reaction to wasp stings, people do not want wasps living too close to their home. If you notice a large number of wasps nearby, chances are good that there is a nest. If you or a family member is sensitive to wasp venom, you should never attempt to remove a nest on your own. The professionals at Radar Pest Control are expertly trained to be able to eliminate the wasps and remove the nest. Our technicians can do this quickly and safely so that your family will not be bothered any more. For Sunshine Coast wasp control, trust Radar Pest Control to get the job done right.