Ant Pheromones and How They Affect Pest Control 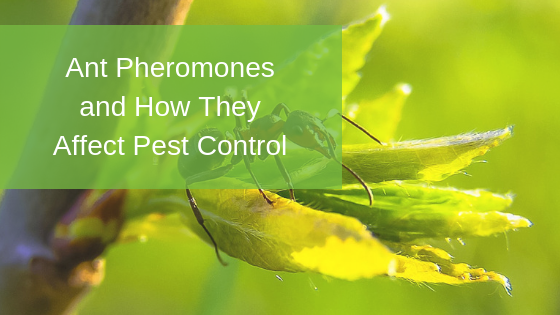 Ants are social insects with a complex organization and caste system. Ants work collectively to support their colony. They achieve this partly by using pheromones to communicate. It is necessary to understand and exploit these ant communication behaviors in order to get the most effective pest control results.

Pheromones are chemical signals that help ants communicate such things as food, alarm, attraction, and the difference between colony mates and strangers. Pheromones are detected through the ant’s antennae, which can perceive smells.

When worker ants find food, they will leave a pheromone trail back to the nest so that other ants can follow. This is why lines of ants can often be seen following each other throughout your house. When an ant is crushed, it will release an “alarm pheromone” that sends other nearby ants into attack mode and attracts them to come to the rescue. There are also “propaganda pheromones” that help to confuse enemy ants so that they will fight each other instead of attacking the colony.

These pheromones are spread to other ants in the colony through their food. Worker ants feed other ants through trophallaxis, which means that they regurgitate liquid food from a special organ known as the crop. This is a “social organ” that holds food to be shared with the colony. This sharing of food also shares these chemical pheromones, so that ants of the same colony can identify each other.

How do pheromones affect ant control?

Start by placing ant baits in areas where ants are regularly seen. Ant baits come in gels, granules, and bait stations. The active ingredient in baits is often protein or grease-based so that they will attract many different varieties of ants. The ants will gather the bait, take it back to the nest, and spread the poison through trophallaxis to the rest of the colony. Although baits do not work immediately, they are extremely effective at getting rid of ant nests.

Next, thoroughly clean the area where you have seen ants. Clean around entry points, as well as along the floor where the ants travel. Use soap and water to remove any pheromone trails that they have left behind. These trails are invisible to humans, so do your best to clean the whole area.

Lastly, a residual pesticide should be used around the perimeter of the home and anywhere the ants have gained entrance. A professional pest control technician is trained and certified to apply these insecticides. They will also know how to identify the ant species causing the problem, find the nest, and give you tips that will help you prevent ants in the future. If you need Sunshine Coast ant control, contact Radar Pest Control today.